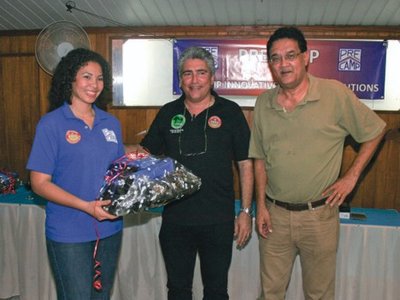 Both the start and finish were out of town . The starting signal was given at the center of the main village at Lely . The crews were sent by the adjacent polders of this town . The route was mostly about the many asphalt roads that these areas are rich now . After a stop at Domburg , the rally caravan continued his route to Unexpected , after which through the Meursweg and Indira Gandhiweg finished again Precamp .

A surprising second place in the league was reserved for the occasion team Rudi Westerborg / Derrick Land bridge while Vinoj Sewbarath Miss and Rakesh Gangaram Panday landed in a very creditable third place .

In the A- and B – class managed the crews Didi Tarnadi / Jerry Tammenga and Steven Dinmohammed / Diana Chan Jon Chu back-to-back winners will be .

family Treasure Hunt
The Sunday Sark holds its annual fundraising event Holiday Snacks Rotary / Sark Fun ( d ) raising Family Treasure Hunt with the Rotary Club Paramaribo Central. All proceeds from this search, which especially on children, go to the socially disadvantaged in the community.
The last year, the ride raised 14,000 US dollars which the girls section of the children’s Sukh Dhaam on Commewijne has been renovated. Six social institutions were also delighted with 180 packets of food were collected by the participants.
The quest starts nine o’clock in the morning in the parking lot of the André Kamperveen Stadium and ends three hours later at the KKF – exhibition grounds. At the finish , there are games for children, a fundraising bingo for lovers and a big-screen TV for the World Cup .