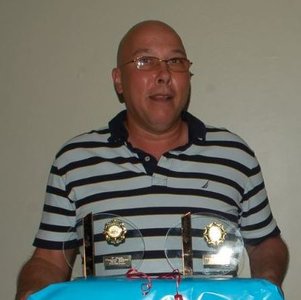 With Olly as driver and AW as navigator, the brothers Have the Precamp Midyear Rally 2013 written on their name. While the results Tuesday night in the clubhouse SARK proved that they passed the numbers two, Jane Harkisoen and Lloyd Chin Kon Sung, with less than one check point.

The Precamp Midyear Rally 2013 was hero Saturday in a rainy weather, as predicted. A large part of the drivers came rather fast to the conclusion that during a rainy weather was a bit harder. The result was that more time was needed to find the checkpoints, which caused problems to adhere to the ideal time. However, this negative factor was equally a great influence on all teams.

The sponsor of this rally has already indicated, that it will finance the Precamp Midyear rally again next year, making the continuation of this “rain rally” assured. However, several rally drivers do like to see that the rally is postponed to Sunday because many of them cannot make it on Saturday, in this edition of the Precamp Midyear Rally 62 teams participated, which may still be called a success Vernon Oostwijk and Ryan Abraham are the winners in the A-class Precamp Midyear Rally